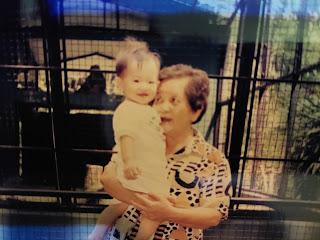 Summary - Fishing and All

Along with age, perhaps, I am feeling less enthusiasm in writing here. Been to and fished at few places, local and abroad, since my last penning down here in my blog.

This trip to Hanzhou took place early of year end last year. Route was Hanzhou-Shanghai-Hanzhou. We took a tourist van from Hanzhou and spent an evening only in Shanghai, with primary intention to try some authentic Shanghai food, and to visit The Bund.

Unfortunately Shanghai was in heavy haze then, with visibility of less than 1km or so. After our hotel check in, five of us walked from our hotel to The Bund in 12 deg. C of dusk and soft breeze of end autumn. The Bund is one of the few tourist spots that I like in Shanghai. Each time I walked at the long walkaway, I tend to visualize in my own imagination how bustling Shanghai was when those buildings were built by Westerners during 19th centuries.
My first visit to Shanghai was in year 2007 and I visited The Bund too. I recalled historical events that those buildings had witnessed in the last hundred years, and the sentiment was simply lamentable.
I did not really like Shanghai, even then. I told my tour guide that day, who was my former colleague and good friend, that Shanghai was too metropolitan to my liking.

A rare photo of my second brother and myself, with The Bund at the back. 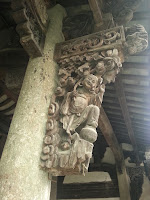 We visited 2 cities that were rebuild for the ancient effect of it; Shao Xing (绍兴） and Wu Zhen （乌镇).
We hired a tourist MPV that took 5 of us comfortably and visited Shao Xing on our way from Shanghai back to Hanzhou. The driving took some an hour or so, if I remember correctly.
This detailed engraved art piece at pillar of a traditional vinegar factory captured my attention.

Visited the renown restaurant Xian Heng (咸亨) at Shao Xing and tried the local delicacies there. Food was good and we had a good time there. Weather was rather cold and we took some Chinese wine to warm our selves up. A good experience it was.
Xian Heng was built in year 1884 and closed down couple of years after. In year 1981, the authority rebuild it and launched it as a major tourism attraction in Shao Xing, along with other tourism introduction Shao Xing as the home town of the great Chinese writer, Lu Xun (鲁迅).

Took a group photo just outside of Xian Heng Restaurant after our lunch. The total bill came up to approximately RM 160.+, and I would not say the food is cheap, but we had some nice meals that was really new to us and topped with tourist mood, we were happy. 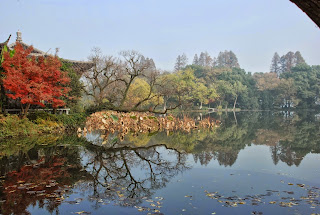 While in Hanzhou, we visited Westlake (西湖）， the famous garden built since Chinese Emperors time. I was told that Westlake is ranked top ten tourism attractions in whole China. A huge fresh water lake with islands, plants and flowers on nice landscape. I was rather interested if there is some nice exotic specie in here that I would return for some interesting fishing here, but only small idunnowat white fish was sighted.
Leaves turned yellow and mostly were dropped as it was end autumn. I thought Westlake should be greener and therefore nicer during spring.

Took this picture at Westlake entrance point, from where we stayed. Haze was in Westlake when we were there, especially in the morning. To bad that we could not see the wide beautiful lake.

A group photo in Wu Zhen. Temperature of around 10 deg C was obviously too cold for tourist from tropical area like we. The entire Wu Zhen was a tourist attraction spot with buildings rebuild with ancient Chinese architectural and design. I thought the tourist authority should put some food stalls there and serve old Chinese cuisine too. 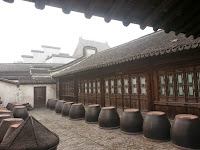 A traditional vinegar making yard in Shao Xing. Love this photo for the tradition urn, the roof and doors, though deep down in my heart I know they are products of modern world today. 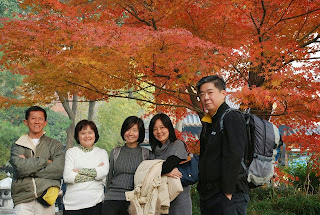 We reached the entrance point of Xihu Lei Feng Ta, or Lei Feng Pagoda, and thought that the staircase required to step up to the top was too many. Instead, we looked around for some nice spot for a group photo and choose this nice view with about-to-dry maple leaves as background.

Had a much expected lunch at Wu Zhen. The experience of sipping warm soup in that cold afternoon was simply extraordinary!

My fishing buddy called me and asked me if I want to join a jigging + bottom fishing trip to Jarak waters on a new boat that we have not charter before. I got few things arranged after I hanged up his phone and call him again to say we shall go ahead.

I met trip organizer 2 days after, and after he shown me the photo of the boat we are going to board, I realise the boat is not completely new to us as we used that boat some 4 years back, with a somewhat terrible catch. I remember the trip where 3 skippers were trying hard to park the boat correctly in order to have our baits drift to a shipwreck, without success. It was obvious the estimation of skippers then to settle at a point with compromise between wind and tide were never succeeded.

Later we were informed that the skippers that took us out few years back is not working for the new boat owner anymore and we thought we should just proceed.

We tried jigging at a coral area some 8nm South of Pangkor Island, and one of fellow fishing mates got awarded with a beautiful 4-kgish golden snapper. All other jigging anglers register no bite at all. 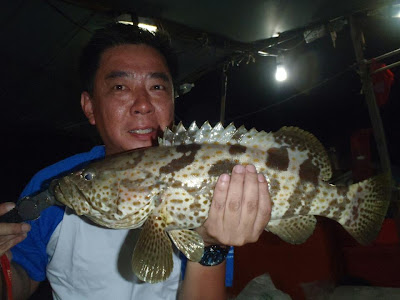 Got this small kerapu in one of the spots on fresh squid. Since catch is small size, I clean and cut it into 4 pieces for 4 servings ;-) 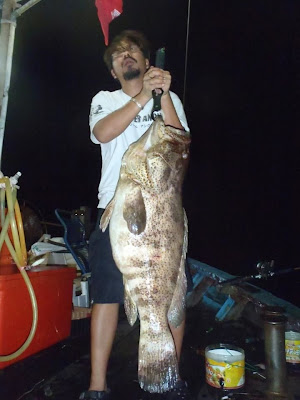 Comparison of GT Fishing in Oman and Seram Waters

Was checking with fishing charters in Seram Waters and Oman on fishing trip arrangements and got the information tabulated as below.

With the table, it is easier to see the difference between travelling time needed to reach the fishing ground of the two waters. Take Seram waters as an example, the flight route to reach Bandanaira would be KL-Jakarta-Ambon-Bandanaira, with one overnight in Ambon is needed due to flight departure time.

It is worth mentioning that the connecting flight from Ambon to Bandanaira is unscheduled and not fixed. Serve with small plane that can accommodate less than 20 passenger each time, the weight limit of luggage allow by each passenger is 10kg only, yes, 10kg. Additional luggage would be charged IDR 10,000 per kg which is still within reasonable range, I think.

The unsual thing is, there is no information available about this particular flight and one need to be physically presence there to get it booked. Meaning anglers could only book the itinery via the local fishing charter. Speedboats meant for sending tourist between Ambon and Bandanaira are available too, then again, not much information is available for one to plan a trip him or herself.

Bandanaira is located some 230km east of Ambon. While I check through information on the internet about Bandanaira, I got to know Bandanaira is a famous spot for diving too.

A dinner was planned at home couple of weeks back, for celebration of my sister birthday. My wife and sister cooked some awesome food for that dinner and would post it here for my apetide induction. 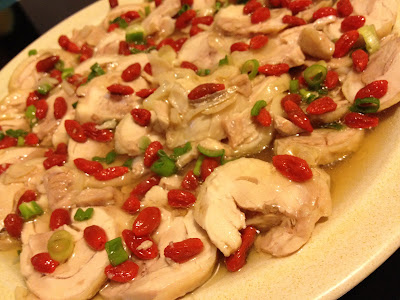 My wife read about this dish from recipe magazine somewhere and opted for it as one of the main dishes that evening. The preparation involves deboning the chicken, tie it up with strings to hold its shape and marinate in Chinese herbs and after that got it steamed, follow by marinate it in Chinese wine for couple of hours before serving it.

This dish was impressive with the combined taste of chicken and chinese wine that blended very well. Though the level of saltiness is a bit insufficient in my liking but the thick aroma came out from a mouthfull chew was really good. 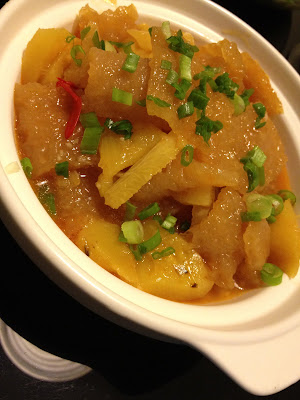 The process of stewing this crunchy pig skin in the curry made it absorbed with pineapple aroma, and when you chew it they flood your mouth with rich good taste. Very appetizing and made me taking it irresistibly! 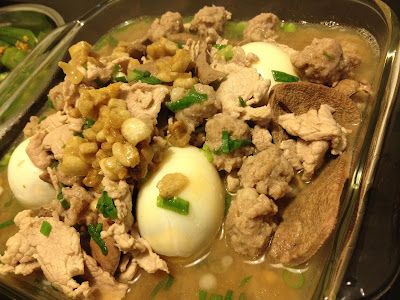 My sister favorite; gravy of stew pork and innards.

This dish was cooked as gravy for "mee-sua" (fine dry noodle), and it has been a tradition to add chicken eggs for giving longevity to the birthday person. Dip-fried lard is added to add rich flavor of it. Nice Chinese food but one could not take it much for it is too "riching"! 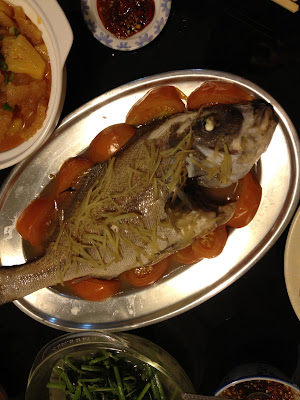 Told my sister that the taste of this specie is rather plain and perhaps she can do something about it. She put oyster sauce on it and kept it aside for sometime before got it steamed. The outcome was not bad; taste better with some MSG from the oyster sauce I believed. A brilliantly fresh fish nevertheless.

Just realised I got some nice fishing trip photos in my lappy and thought why not get it posted here. The trip was made with skipper recommendation to test one of coral spots that has not been visited for years. 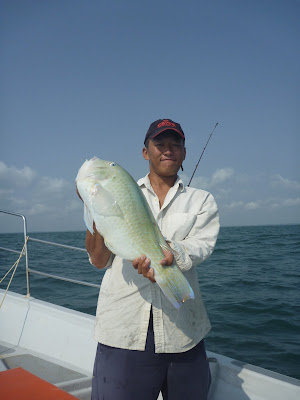 Skipper Ah Boy with his blackspot tusky; the biggest among all and estimated at 4.5kg.

I witnessed the brutal pull of this tusky as I was right beside Ah Boy with catch net in my palm. The fellow went into tug war and the situation stayed 50:50 for 30 seconds or so, as each crank Ah Boy successfully made, follow by the line got peeled for few rounds. 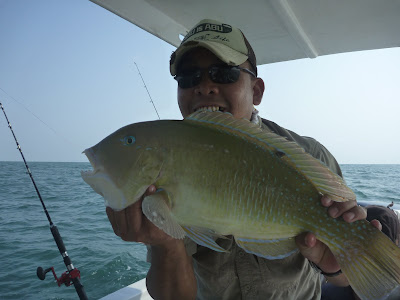 Derrick with his tusky. 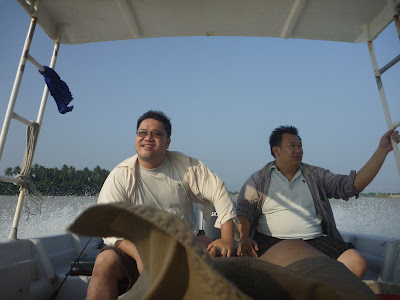 HP and GO chill out while we were on our way out. 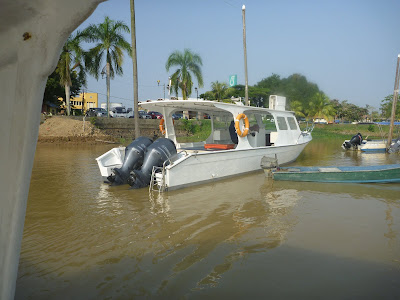 A new nice boat at Pekan jetty, wondering who is the owner.

We did drift bottom fishing at few spots and were awarded with different species of squid and some white tail grouper too. 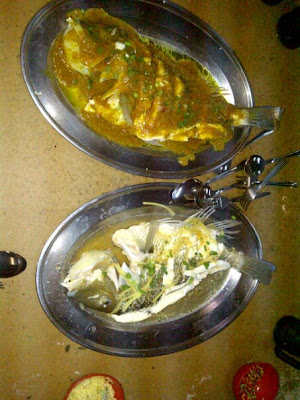 We brought one of the rather big size tuskies to the usual restaurant we have our dinner, and told the chef to prepare it in "mix servings", and it shall completely up to him on how to cook it. We waited for 30 minutes and this was how the fish turn up as; assam steam and ginger steam, loooove it!
Posted by Ah Kai at 1:19 AM No comments:

Working on a fishing trip in the waters of Seram Island, Indonesia 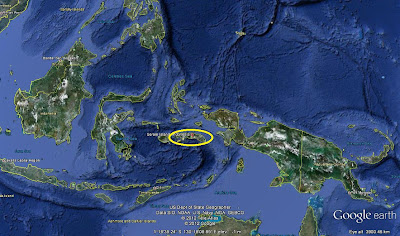 Flight Route of heading to fishing ground; KLIA-Jakarta (Int.)-Jakarta (Dom.)-Ambon-Bandanaira, with total traveling hours of approximately 48 hours to reach Bandanaira and overnight in Ambon because of early flight from Ambon to Bandanaira

Flight Route of returning to Malaysia; Ambon-Bandanaira-Jakarta (Dom.)-Jakarta (Int.)-KLIA, with total traveling hours of slightly less than 48 hours, with overnight in Bandanaira.

With the above traveling, fishing duration will be 3 1/2 full day fishing.
Posted by Ah Kai at 10:16 PM 2 comments: